(b) Discuss the effectiveness of government policies (legislation and regulation)

(b) Discuss the effectiveness of government policies (legislation and regulation) to reduce monopoly power. [15 marks]

Explain how legislation and regulation can be used to reduce monopoly power.

– Governments can privatise a state-owned monopoly, such as public transport. State owned monopoly tends to have extremely high BTE due to government protection (legal barriers), hence it is not possible for other firms to enter this market to break the monopoly.

– This often results in productive and X-inefficiency (where firms have no incentives to reduce COSTS over time due to the lack of competition); for example public transport operators do not try to reduce costs because they are not aiming to maximise profits, they are often only trying to serve national interests by providing necessity)

– Government regulation can be used to break down such power and introduce new competition, the markets become contestable- new firms can enter because BTE are reduced. For example, in Singapore, Singtel and SBS used to be state-owned monopoly, but were later privatised and now become oligopolistic markets.

This is effective because privatisation results in more competition; more rival firms enter the market and firms become less productive inefficient (reduce costs to maximise profits) and dynamic efficient (innovating and changing the products over time). It is also good because the state-owned monopoly could be suffering from diseconomies of scale, if it is broken down, there are more costs savings.

– Limitations: If the industry was a natural monopoly, reduction of monopoly power would force the firm to produce less output, and he starts to produce to the left of the minimum AC curve. This means he is not fully reaping the economies of scale in this market. For example, in public transport industry, the infrastructure is really expensive, it makes more sense to have only 1 firm paying the cost and spreading the costs over a large quantity of consumers. The average costs would be Pc. If other firms were introduced, they waste resources by building another set of infrastructures, and there would be not enough consumers to share the costs of building. So the average costs starts rising to between Pr and Pc.

1st case of price regulation is MC pricing; this allocation is socially optimal (welfare is maximised). However, firms make a loss because their AC is higher than the AR, so firms might shut down in the long run unless government fund them (this is bad because they will have to increase taxes to finance this).

2nd case of price regulation is AC pricing; this allocation is where AC=AR. It is good compared to unregulated markets, because there is now more allocation in this industry(less allocative inefficiency), though there is still some amount of welfare loss. It is nonetheless better because firms also make normal profits and are able to sustain operations in the long run.

In essence, regulation in pricing is effective especially if it is on monopolies that serve basic necessity like water, electricity, and transport. In such cases it is important to ensure affordability of prices and equitable distribution, hence regulation is very effective in reducing monopoly power. However, governments might have to subsidise the firms and create less incentives for firm to reduce costs in the long run. 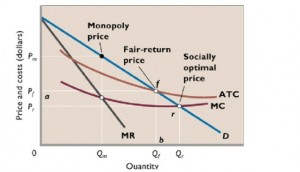 Regulation should be done to a certain extent. It should be used when firms’ exploit monopoly power and raise prices on consumers while being inefficient. In which case, regulation can increase competition and force this industry to become efficient. It is not effective if it is a natural monopoly with huge economies of scale and firms are minimising costs by spreading costs over a large consumer base (electricity, water).

Eventually, whether regulation is effective depends on the type of industry in question. Regulation on pricing is needed and most effective in natural monopolies serving basic necessity, and anti-monopoly laws are best used in other generic monopoly.

Contact us now and join us for a free trial!