China’s precarious growth versus the price of reform

China’s uncannily stable growth versus the price of reform 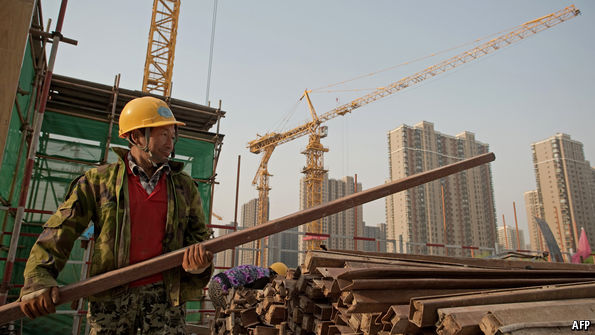 IN THE pantheon of economic clichés, the concept of “short-term pain for long-term gain” is surely a contender for top spot. It is trotted out again and again when discussing why Country X must undertake such and such difficult reforms to reap untold benefits down the road. For those analysing or reporting on the Chinese economy, it has become a familiar refrain. This does not mean it is wrong; China’s old growth model of credit-fuelled investment has led to a vast accumulation of debt and a big drop in productivity. Change is needed, even though there will be costs. But being a cliché, it can obscure details. What exactly is this short-term pain?

To start, one thing that should be clear: China has so far felt little in the way of pain. Although some regions, especially the north-east, have endured a tough few years, China has kept defaults to a minimum and held its credit spigot wide open. Thanks in large part to that, the economy grew 6.7% in the third quarter from a year earlier, according to data published today. This marks the first time in China’s modern economic history (ie, since detailed quarterly records began in 1992) that it has turned in identical year-on-year growth rates for three consecutive quarters. That is uncanny tranquillity for a $10 trillion economy which is supposed to be going through a wrenching transition from heavy industries to modern services.

In nominal terms, the trend looks even better. Annual growth actually rebounded, from a shade less than 6% in third quarter last year to 7.8% over the past three months. The precise size of the rebound is open to debate, but there is enough in the way of alternative indicators to lend credence to the picture of a rebound. Property sales are booming; corporate earnings have strengthened; prices of goods as they leave the factory gate have started rising after more than four years of deflation. Little wonder thatinvestors’ concerns about China have subsided since the start of the year.

Yet beneath the surface, risks from the debt build-up continue to mount. Total credit has grown roughly 16% this year, twice as fast as nominal growth, meaning that the economy is still leveraging up at a rapid pace. The rise in China’s debt-to-GDP level—from roughly 150% before the 2008 global financial crisis to more than 250% today—puts it in the same league as countries such as Spain and Japan that went on to suffer serious slowdowns or financial turmoil.

Hence the calls for short-term pain to avoid long-term pain. What that means in general terms might seem evident: China should trade lower economic growth today for slower debt accumulation, reducing the chances of a crisis. But that general statement does not take the analysis very far. Done hastily or heavy-handedly, a slowdown in debt accumulation could bring about the very crisis it is meant to defuse. Clichés can be dangerous, not just dull.

A new working paper by the International Monetary Fund is particularly good in outlining what “short-term pain” might involve. The IMF has been among the loudest of voices in warning about China’s debt risks. But it also takes a very measured tone in assessing what can be done.

Let’s be realistic
The IMF contrasts a purist market approach with a government-led solution. The virtue of a market approach is that it would be transparent, laying the foundations for better allocation of credit in the future. But it is also susceptible to extreme volatility, even in the most sophisticated of economies. In China’s case, the IMF argues that it is just not realistic. The biggest creditors are state-owned banks and the biggest debtors are state-owned companies. They are too cosy with one another and cannot shift to market rules overnight.

Instead, the IMF says that a high-level decision is needed to address debt problems, and quickly. Rather than leaving creditors and debtors to sort out their mess by themselves, financial regulators should participate alongside them. This is more likely to produce a disciplined, consistent solution across different sectors of the economy. To that end, China also needs standards for triage in determining which companies are viable. The IMF argues that, for one thing, banks need to come clean about their true bad-loan levels (officially, less than 2% of loans are non-performing; the IMF estimates that about 15% of corporate loans are at risk).

But it is not just bitter medicine. Removing implicit guarantees on the debts of state-owned companies is, for instance, bound to hurt. Rather that doing it all at once, the IMF suggests that China start from newly issued products rather than bonds that are already trading. It also sees plenty of scope for the central government to step up support for laid-off workers. Municipalities manage unemployment insurance, providing little, if any, coverage for the 200m migrants who work in places where they are not registered to live. And by opening up sectors such as telecommunications and energy to private investors, China should be able to generate more productivity growth.

China is already moving on some of these fronts. Notably, regulators have started co-ordinating debt-for-equity swaps to trim the liabilities of state firms. However, judging by the continued drift upward in debt levels, it is still moving far from fast enough.

What is perhaps most striking of all is the price that the IMF puts on “short-term pain”. It reckons that, if implemented, the array of reforms would cut growth to about 6% next year, followed by a long stretch of annual growth of 6.5%. Inaction, by contrast, would allow for stronger growth next year but then lead to a steady decline to as low as 3% by 2020. These are of course just estimates. But the message ought to embolden China’s reformers: short-term pain need not be unbearably painful.

Quintessential Education believes the fiscal policies should be short term pain as well. Join our Economics Tuition classes for more in depth discussion and be prepared for your A and IB exams!