Skip to content
Home » The Expansionary Austerity Zombie
Previous Next 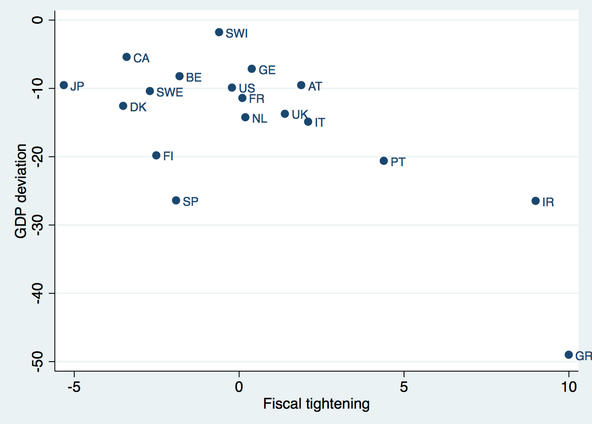 The doctrine of expansionary austerity — the proposition that cuts in government spending would actually cause higher growth despite their direct negative impact on demand, thanks to the confidence fairy — was all the rage in policy circles five years ago. But it brutally failed the reality test; instead, the evidence pointed overwhelmingly to the continued existence of something very like the old-fashioned Keynesian multiplier.

But expansionary austerity was and is such a convenient doctrine politically that, like insistence on the magical effects of tax cuts, it has proved unkillable. Every economic uptick in an economy that practiced austerity in the past is trumpeted as proof that Keynesians were wrong and the austerians were right; never mind distinctions between levels and rates of change, or the fact that even the most Keynesian economists never asserted that fiscal policy is the *only* determinant of growth. (Animal spirits, anyone?) And in a predictable case of projection, anyone presenting the evidence gets accused of cherry-picking the data.

It’s never going to be possible to kill this zombie once and for all. But mainly for my own sake, I decided to provide a somewhat new take on the evidence.

The figure above covers the period from 2007 to 2015. This is a break from my previous efforts, which tended to start from 2009, just before the big austerity drive began.

On the horizontal axis I show an estimate of fiscal tightening, as measured by the IMF’s estimate of the cyclically adjusted primary balance (i.e., excluding interest payments) as a percentage of GDP. I have some doubts about that measure; in particular, the Fund’s method for estimating potential GDP tends to make pre-crisis economies look much more overheated than they probably were, and hence to make their structural budget position look worse; I think this is especially distorting in the case of Ireland, which has not in reality done more austerity than Greece. But in the interest of clarity, I’m just using the numbers as given.

Meanwhile, on the vertical axis I show, not the raw change in GDP, but the deviation of real GDP from what the IMF was projecting before the crisis. I derive the latter from the economic projections in the April 2008 World Economic Outlook, which went out to 2013; I assumed that projected growth 2007-2013 was expected to continue for two more years to get 2015 estimates.

What you see is a clear negative relationship between austerity and growth — actually an implied multiplier of almost 2. You also see some countries clearly experiencing other issues besides the effects of austerity. Ireland has done badly, but not as badly as you might have expected given the measured fiscal tightening (but see the discussion above.) Finland has done very badly despite mild austerity; the collapse of Nokia and the problems of forest products did the job there. The same is true of Spain, afflicted by the collapse of its mammoth housing bubble.

But the data continue to show an overwhelmingly Keynesian effect of fiscal policy. It take a lot of effort to see anything different in the evidence.

See Schedules and Rates ; Economics
Contact us now and join us for a free trial!